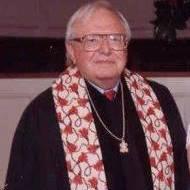 The Reverend James Houston Hodges died June 5, 2019 in Huntsville, Alabama at the age of 89.

Born in Tyler, Texas, on March 15, 1930, Hodges was the only son of newspaper publishers James Allen Hodges and Elizabeth Duncan Pearson. He attended Clovis (New Mexico) High School and graduated as valedictorian from Littlefield (Texas) High School in 1947.

After attending the University of Hawaii, he transferred to Texas Technological College (now Texas Tech University) in Lubbock, where he graduated with a degree in Philosophy in 1951, and then received a Master of Divinity degree from Princeton Theological Seminary in New Jersey. As an ordained Presbyterian minister, he worked at parishes in Whitesboro and Temple, Texas. In 1961, he became the Presbyterian campus minister at Texas Tech, followed by campus ministry assignments at Southern Methodist University in Dallas and at the University of Texas at Austin.

In 1972 he was chosen to staff the Presbyterian Church (U.S.A.) Synod of the Sun, newly-formed in Denton, Texas. He later served in the United Church of Canada in Winnipeg, Manitoba and as Associate Executive of San Francisco Presbytery. Hodges retired as Executive Presbyter of North Alabama Presbytery in 1996, and continued to be involved in religious life as Parish Associate of Big Cove Presbyterian Church in Brownsboro, Alabama.

An avid writer and columnist, Hodges published three books, and produced myriad articles on religious topics throughout his career. From 1996 to 1998 he served as editor of Monday Morning, a national magazine for Presbyterian clergy, and wrote H-Squared, a monthly column with a nod to his initials, “HH.” He was a regular contributor to “The Sundial Writers’ Corner” on WLRH Radio in Huntsville, writing and recording short pieces for the literary program.

In the 1980s, Hodges was an early advocate for technology, as a part of Ecunet and PresbyNet, communications networks for “connecting people of faith”. His H-Squared column spawned an online discussion group–a community that continues today. Technologically savvy, he loved video calls with his grandchildren, and connecting with family and friends on social media.

An avid sports fan, Hodges had a deep love for baseball, often championing the underdog, but always returning to root for his favorite team, the Atlanta Braves. In high school he played football, was later known as a “killer racquetball player,” and continued to enjoy twice-daily walks. He also enjoyed photography, and was an advocate for human rights.

He was well-known throughout the Presbyterian community, making time to preach, teach, and discuss. Generous with his time, energy, and wisdom, Hodges will be recalled as a beloved father and husband, as well as a counselor, mentor, and friend to many.